Raku at the Pen

Raku is a Japanese word that can be translated as enjoyment, happiness, or comfort. In 1580, the potter Chijiro is thought to be the first to produce this form of ware. He developed a low-fire pottery process in which he placed ware directly into a red-hot kiln, then once the glazes had melted, removing the ware from the still red-hot kiln and allowing the pottery to cool outside the kiln.

Modern Raku is best described as a firing process in which the pot is taken up to approximately 1800 degrees in a propane fueled kiln. This can take anywhere from 45 minutes to an hour or more, depending on whether the kiln is already hot. At this point, in western raku, the pot is removed from the fire and placed into a container filled with combustible material. This can be newspaper, leaves, shavings, hay – some people use seaweed and combinations of other combustibles – resulting in a lively fire. The container is then closed up. This causes the atmosphere inside the container to be “reduced,” or starved of oxygen. This reduced atmosphere causes the clay to turn from white to black, and it also causes the glazes to change color – notably copper turns from green to red, purple, magenta and sometimes orange.

There are several variations on the Raku firing technique. At Pig Pen Pottery we are interested in the following: Raku Western style, Obvara Raku, Saggar Firing, Horsehair Raku, and Pit Fire.

Please click on the little square icon to see the gallery. 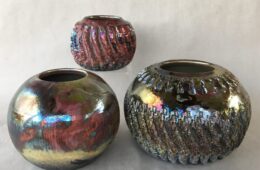 The piece is removed from the fire at about 1800 degrees. I put it onto a bed of combustibles which sits on a bed of sand. I then put a bucket over the pot and the fire, using the sand to seal it making it more or less airtight. Photo by Christopher... 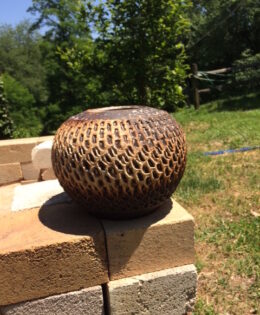 Obvara Raku is actually not raku at all. The only similarity is that the pot gets heated up in a raku kiln. Obvara is a technique used in the Balkans to seal low fire pots to prepare them for cooking and serving food. This method is said to promote good health and longevity to those consuming the food. How can this not be a good thing? When the kiln is at 1650 degrees, I took the pot out and submerged it into a bucket of fermenting flour yeast and sugar.... 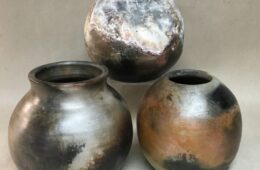 Pit firing may be the oldest method for firing clay. The firing temperature is very low and the pieces are primarily decorative, although anciently they were certainly widely used. Typically the pots are piled together in a pit, or can, and surrounded by combustibles, and chemicals, such as copper carbonate, salt, etc. Depending on what is in the pit, the pots will come out black, grey, green, pink,...